There were two memories that kept me from going to sea. When I was 10 years old, I found a decomposed dead dog on the sand beach. I remembered its hollow eye sockets staring at the sky and flies buzzing around. The acrid smell fills my nostrils even now when I recall it. The second one is an unexpected encounter with a forensic picture at a university. A young man got his head caught in a boat screw while scuba diving. His head was split in half like a watermelon. I swore I would never try marine sports for the rest of my life.

More than 10 years have past, and somehow my memories faded. I’m dying to try scuba diving this summer because I watched a TV program that showed the miracle of the sea world. Since my friends got their scuba diving licenses in colleges, I have no friends to go with. Visiting a scuba diving shop alone seemed like a big challenge because I must look like a kook without a friend. I pondered over the issue during this summer and decided to go alone before I become too old for that.

When I emailed a local diving shop, I was still wondering if I should quit now. But it was 5 minutes later when the diving shop called me to arrange the training schedule. I couldn’t say I had changed my mind, so I decided to go to the shop to sign a contract the next day. I paid 570 dollars for the diving course. It will take 4 days to get the license. It turned out that most of the customers came to the shop alone and became friends there. Diving requires time and money, so it’s difficult to find friends who have both.

I visited the diving shop a week later. I thought I would go to a swimming pool to practice the actual procedure before going to sea. But it turned out that I had to go with other divers with licenses. Nine members got into a small bus, and off we went to a nearby sea.

Bou-no-tsu is about 1.5 hours from our city and famous for its beautiful scenery. Since I was not interested in Marine sports, I had never visited there. The contrast of mountains and sea was fabulous, and I regretted that I had not enjoyed diving earlier.

Although I’ve never swam in a deep sea, it wasn’t scary to snorkel as my diving suits helped me to float. I practiced snorkeling while others were enjoying diving in the morning. It was unfortunate that I couldn’t see anything as the water was clouded after a typhoon.

After lunch, we moved to another diving point where we could watch coral reefs. The instructor helped me to load all the diving stuff and took me to the 5m deep seabed. The water was crystal clear, and there were varieties of fish in the sea. I saw schools of blue fish, yellow fish, and sea urchins, but unfortunately, most of the creatures were unknown to me. It was as if I was wandering into an aquarium where many beautiful sea creatures are exhibited.

10 minutes or so later, the sea sickness I had been feeling became unbearable, and I gave up. I was taken back to the boat, and lay sprawled out on the boat. I couldn’t endure another minute on the sea, but had to wait. I was so sorry that I couldn’t take care of my belongings while the instructor cleaned my diving tools.

The dizziness subsided soon after I got off the boat. I thought I would never be done scuba diving while on the boat, but I changed my mind to visit again next week because other people were excited to see the anemone fish and a lobster which I had missed. After all, I wouldn’t fully grasp the greatness of the diving unless I overcome the sea sickness. At least I should give it another try. 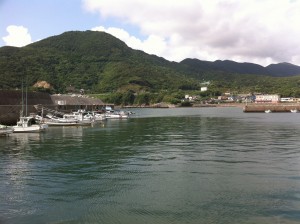